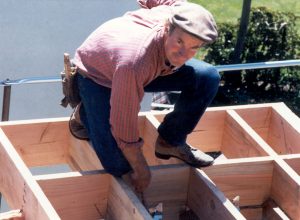 Paul Winans began his career as an apprentice at the age of fifteen, learning all aspects of how to build a house from a master craftsman. After moving from Long Island to San Francisco in 1974, he eventually settled with his family in Berkeley, and worked as a design/build carpenter on all types of homes, including Victorians. Established as Winans Construction, Paul joined Artistic License in 1985. His attention to detail and uncompromising pursuit of excellence made Winans Construction a good partner for Artistic License members such as David Modell, Stephen Rynerson and Erik Kramvik, with whom he collaborated on many projects ranging from high Victorian interiors and facades to restoring the library at Villa Montalvo.

Paul was an active member of the guild until selling his company in 2007 and moving to Oregon in 2008. Ever striving for quality in the industry, he has been a speaker, author and consultant to remodelers nationwide and in Canada, and published a book, The Remodeling Life: A Journey From Laggard to Leader, in 2019.