Before finding his true calling as a decorative painter, George Zaffle earned degrees in both journalism and foreign language at Ohio University. After his 1981 graduation, he headed for California on his bicycle. En route, he met a fellow cyclist named Larry Boyce, who also happened to be one of this country’s top decorative painters. Soon joining ranks with Larry Boyce and Associates, George learned his trade while cycling with the group throughout the western states. Inspired by America’s itinerant 19th century decorative painters, they found willing venues for their period style stenciling schemes in grand Victorian rooms emcountered along the way.

Their fine work garnered a great deal of national publicity (from television’s Today Show and Evening Magazine, to the Smithsonian Magazine and Old House Journal, to the New York Times, and other extensive newspaper coverage), leading to high-profile commissions including residences for Bette Midler, Jessica McClintock, Danny Glover, and restoration of the historic Office of the Vice President in Washington, D.C.

While serving apprenticeships with several master painters, George worked on numerous other restorations, including churches, hotels, government spaces and private residences. He went on to attend the Van der Kelen School in Brussells, Belgium, one of the world’s finest schools of decorative painting. He has mastered many painting techniques, including those used for murals, true fresco, trompe l’oeil, gold leaf, faux finishes such as marbleizing and wood graining, and old-world cabinetry and furniture finishes. In 1987, George started his own decorative painting company.

Since 1986, George has shared his skills as a teacher, working with the Joanne Day Studio in San Francisco, and for various private schools across America and Europe. Currently he teaches decorative painting at the University of California, Berkeley, and is an instructor/lecturer at the Stencil Artisans League, Inc. In a venture with two partners, he brings students to England’s Naworth Castle to learn painting skills while working on its historic rooms. George also operates his own decorative painting school near Lake Tahoe, California. 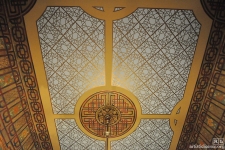 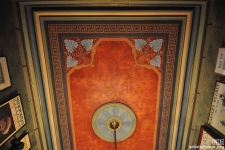 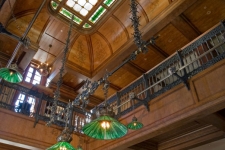 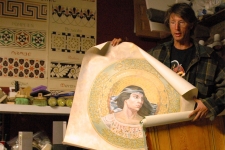 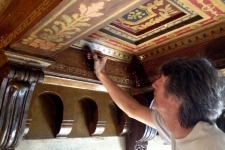