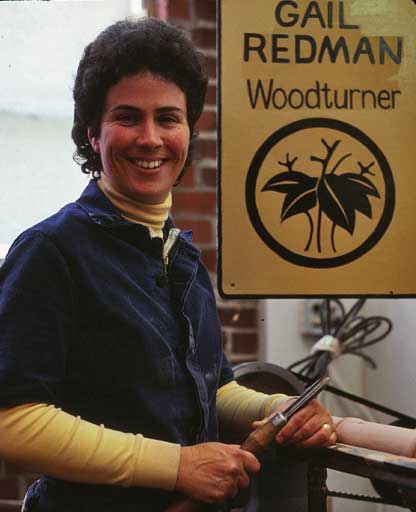 Gail Redman was born in Los Angeles and graduated from UC Davis with a degree in botany. She was an independent, adventurous spirit who traveled the world at an early age and ventured to places that few women would ever visit on their own. She visited over 100 countries and developed passions for world music, crafts, and ethnic cultures. These experiences propelled her into a life that few would have predicted. In 1974, she spent time in New Zealand and apprenticed herself to a European master woodturner. She learned the intricate art of woodturning, an uncommon choice for a woman, and became one of the country’s most accomplished woodturners. She opened a shop in San Francisco in the late 1970’s, just as the Victorian Revival was getting underway, and soon found her services in great demand. She met other artisans involved in the restoration of San Francisco Victorians and became one of the charter members of Artistic License. Gail produced many thousands of fine woodturnings that adorn countless period buildings in the Bay Area and beyond. Her work has been shown in many museums and specialty trade publications. She remained true to her craft to the end of her life and was an active and well-loved member of Artistic License until her death from breast cancer in May, 2000.