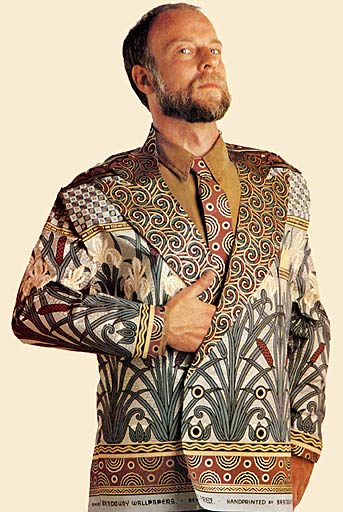 Bruce Bradbury is the founder of Bradbury & Bradbury Art Wallpapers, a small hand printing studio with an international reputation for fine reproductions of wallpapers from the 19th and early 20th centuries. His interest in historic interiors started as a teenager, when he fell under the spell of the English Victorian designer William Morris. After research in England and several years as an apprentice in wallpaper factories, he began redesigning and hand-printing the elaborate wall and ceiling decorations of the Victorian period in a one-man shop in Benicia, California in 1979. He was soon joined by other restoration enthusiasts, and the firm has produced wallpapers for many of the finest public and private restorations in the US, Europe, and Australia. Inspired by the work of other Bay Area craftspeople who share a passion for historic restoration, Bruce was also a founding member of Artistic License. In recognition of his outstanding career, and for his loyalty and service to the Guild, in 2006 the members of Artistic License unanimously elected Bruce Bradbury as their first Hall of Fame member.